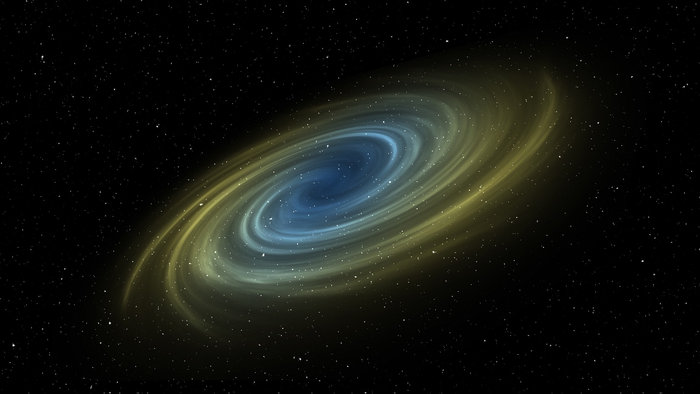 At the centre of spiral galaxies – those near to us but also those billions of light-years away – there is a vast spherical region made up of dark matter particles. This region has two defining characteristics: a density that is constant  out to a certain radius that amazingly expands over time, while the density decreases. This suggests the existence of a direct interaction between the elementary particles that make up the dark matter halo and those that make up ordinary matter – protons, electrons, neutrons, and photons. We anticipate that this hypothesis is in direct conflict with the current prevailing theory used to describe the universe – known as Lambda-Cold Dark Matter – which posits that particles of cold dark matter are inert and do not interact with any other particle except gravitationally.

These important findings have been reported in a new study, recently published in the prestigious Astronomy and Astrophysics journal, that studied a large number of distant galaxies, some seven billion light-years away. The study, conducted by Gauri Sharma and Paolo Salucci from SISSA, together with Glen Van de Ven from the University of Vienna, took a new look at one of the greatest mysteries of modern physics. According to the authors, this new research represents a step forward in our understanding of dark matter, the elusive element in our universe which has been theorised based on its demonstrable effects on heavenly bodies, but which is yet to be directly proven. This is despite any number of targeted astrophysical observations and experiments set up for the purpose in dedicated underground laboratories.

Dark matter makes up approximately 84% of the mass in the cosmos: “Its dominant presence throughout the galaxies arises from the fact that the stars and hydrogen gas are moving as if governed by an invisible element” explains Gauri Sharma. Up until now, attempts to study it have focused on galaxies near to our own: “In this study, however,” she explains, “for the first time, we were seeking to observe and determine the distribution of the mass of spiral galaxies with the same morphology of those nearby, but much further away and therefore earlier by some seven billion years. The idea is essentially that these progenitors of spiral galaxies like our own could offer fundamental clues into the nature of the particle at the heart of the mystery of dark matter.” Paolo Salucci adds: “By studying the movement of stars in approximately 300 distant galaxies, we discovered that these objects also had a halo of dark matter, and that,  by starting out from the centre of a galaxy, this halo effectively has a region in which its density is constant”. This trait had already been observed in studies examining nearby galaxies, some of which were also the work of SISSA.

The new research has revealed, however, that this central region had something that was wholly unexpected within the context of the so-called “standard model of cosmology”. Sharma says that “as a result of the contrast between the properties of nearby and distant spiral galaxies – that is, between today’s galaxies and their forebears from seven billion years earlier, we could see that not only is there an unexplained region with a constant density of dark matter, but also that its dimensions increase over time as if being subjected to a process of ongoing expansion and dilution.” This evidence is very difficult to be explained   if the dark matter particles did not interact, as posited in the Lambda-CDM model. “In the research we recently published,” says Sharma, “we offer evidence of direct interaction between dark matter and ordinary matter, that over time slowly builds up a region of consistent density from the centre of the galaxy outwards.” But there’s more.

A slow yet inexorable process

“Amazingly, the above region with constant  density  expands over time. It’s a very slow process, but one that is inexorable” states Salucci. One possible explanation? “The simplest is that, in the beginning, when the galaxy was formed, the distribution of dark matter in the spherical halo was as predicted by the Lambda-CDM theory, with a density peak in the centre. Later on, the galactic disc that characterises spiral galaxies is formed, surrounded by a halo of extremely dense dark matter particles. As time passed, the effect of the interaction that we have posited meant that the particles were captured by the stars or expelled into the outer reaches of the galaxy.” This process would create a spherical region  of consistent density within the dark matter halo, with dimensions that increase proportionately over time and finally reach those of the galactic stellar disc, as described in the article in “Astronomy and Astrophysics”. “The results of the study pose important questions for alternative scenarios that describe dark matter particles (aside from Lambda-CDM), such as Warm Dark Matter, Self-Interacting Dark Matter and Ultra Light Dark Matter” says Sharma.

“These models must also account for the clear time evolution registered of the above region. The properties of very distant galaxies in space and time offer cosmologists a genuine gateway to understanding the mysteries of dark matter”. It is interesting to note, “that, in line with Nietzsche’s philosophy, the truth of this mystery may be revealed not by detailing the most beautiful scenario – the one that is mathematically most elegant, simple and anticipated as an expansion of long-verified theories – but rather through an “ugly” scenario determined by an inelegant and complicated observational phenomenology, from a neglected physical theory that is completely unrelated to that which is familiar to us”, says Salucci.