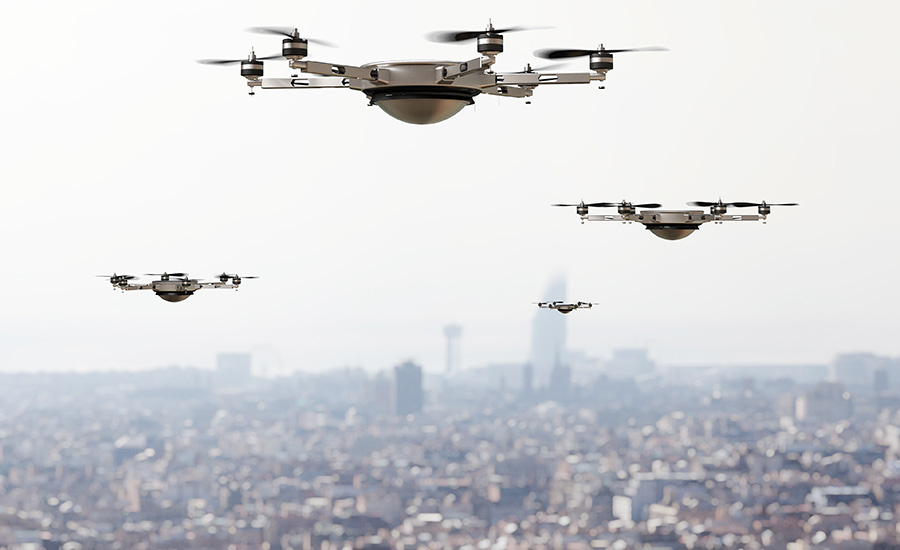 In a couple of years, the number of drones in the U.S. national airspace is projected to grow to more than seven million. So many drones together in the air at once has the potential to create serious safety, efficiency and security issues if not regulated. NASA, the Federal Aviation Administration (FAA) and industry have partnered to develop a capability to manage national airspace drone traffic in the future, called the Unmanned Aircraft Systems (UAS) Traffic Management (UTM) infrastructure, rolling out in phases over time.

The UTM is a cloud-based software architecture that promises organized flight of drones registered with the FAA (think of it as air traffic management, but automated and in the cloud). Anyone flying in the UTM system will need an interface to a UAS Service Supplier (USS) to submit flight intent to other users and receive authorizations for specific access.  This will allow the drones to communicate with UTM for pre-flight schedules and announce airspace use.

Because heightened drone traffic also produces challenges for law enforcement as they try to identify and interdict illicit activity, the Department of Homeland Security (DHS) Science and Technology Directorate (S&T) is working closely with NASA and the FAA to develop its own independent USS to monitor traffic and enable greater transparency.

USS interfaces could be developed in-house by a drone user that has the resources to develop their own, or more likely, they would connect through a third-party interface—in this respect, a USS works like an email server where you send your email on the internet through your internet provider.

Communication between UTM and different USS interfaces is meant to support the needs of the FAA, such as the managing flight plans. In addition, counter-drone systems can potentially use flight information and assist in discriminating friend from foe.

One S&T-supported counter-drone system in development, the Urban Counter-UAS Operational Prototype (UCOP), will be connected to UTM via the aforementioned DHS USS. The UCOP USS software processes flight information and notes any drones not identified as registered in UTM.

“If you have eleven drones in the air, but UTM only has ten of them registered, we can look further at what the eleventh drone is doing,” said Jeff Randorf, an S&T engineering advisor. “We’ll be able to query who is flying and find out specifics that support the interests of Homeland Security and the rest of the homeland security enterprise.”

Through the Low Altitude Authorization Notification Capability (LAANC) drone operators can get authorization(s) in near real-time to operate in controlled airspace, eliminating a sometimes days- or months-long manual process. UTM USS’s that are integrated with LAANC will communicate with each other over the Internet while operators connect to a USS via mobile devices, wired internet, or other electronic means.  Core features of a USS interface will be automated communication with FAA information systems, notification of events in airspace, and sharing of operational plans to de-conflict flights. Other services may be offered by a USS or other data providers and may include monitoring of weather and terrain data.

S&T’s USS and UCOP systems will work to ensure drones that are not authenticated receive special attention while flying in the national airspace.

NASA’s UTM system can serve as a resource to help counter any illicit drone activity arising from a higher volume of drone traffic, and the DHS USS, paired with UCOP and other tools like it is a step further in that effort.

Drone demonstrations and trials through S&T’s Robotic Aircraft Sensor Program (RASP) will provide DHS and suppliers of drone technologies a picture of how law enforcement drones will function in the national airspace, UCOP and other counter-UAS systems connected to UTM will help DHS, Department of Defense (DoD) and First Responders keep the national airspace safe.

“The community of stakeholders around small aircraft in lower altitudes has kicked up,” said Joseph Rios, Chief Engineer of the NASA UTM project. “UTM will create a system for enabling safe, efficient access to low-altitude airspace.”

UTM began as a NASA concept and evolved to a NASA research project that continues today.  This research is building the theoretical foundation for getting drones operating in airspace not typically controlled by FAA Air Traffic Control.