What do Mars and Iceland have in common?

These days, not so much. But more than 4.5 billion years ago, it’s possible the Red Planet had a crust comparable to Iceland today. This discovery, hidden in the oldest martian fragments found on Earth, could provide information about our planet that was lost over billions of years of geological movement and could help explain why the Earth developed into a planet that sustains a broad diversity of life and Mars did not.

These insights into Earth’s past came out of a new study, published today in Nature Communications, by an international team that includes an NAU researcher. The study details how they found the likely martian origin of the 4.48-billion-year-old meteorite, informally named Black Beauty. Its origin is one of the oldest regions of Mars.

“This meteorite recorded the first stage of the evolution of Mars and, by extension, of all terrestrial planets, including the Earth,” said Valerie Payré, a postdoctoral researcher in the Department of Astronomy and Planetary Science. “As the Earth lost its old surface mainly due to plate tectonics, observing such settings in extremely ancient terrains on Mars is a rare window into the ancient Earth surface that we lost a long time ago.”

What Mars can tell us about Earth 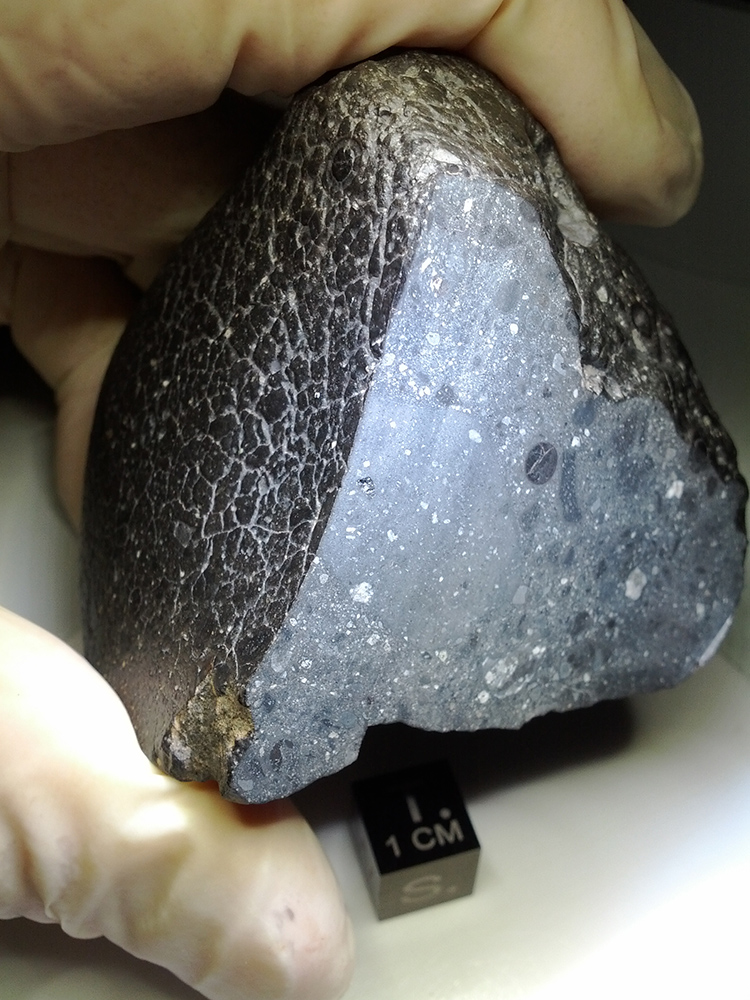 The team, led by Anthony Lagain from Curtin University in Australia, searched for the location of origin of a martian meteorite (officially named NWA—Northwest Africa—7034 for where it was found on Earth). This meteorite, the chemistry of which indicates that Mars had volcanic activity to that found on Earth, recorded the first stage of Mars’ evolution. Although it was ejected from the surface of Mars five to 10 million years ago after an asteroid impact, its source region and geological context has remained a mystery.

This team studied chemical and physical properties of Black Beauty to pinpoint where it came from; they determined it was from Terra Cimmeria-Sirenum, one of the most ancient regions of Mars. It may have a surface similar to Earth’s continents. Planetary bodies like Mars have impacts craters all over their surface, so finding the right one is challenging. In a previous study, Lagain’s team developed a crater detection algorithm that uses high-resolution images of the surface of Mars to identify small impact craters, finding about 90 million as small as 50 meters in diameter. In this study, they were able to isolate the most plausible ejection site—the Karratha crater that excavated ejecta of an older crater named Khujirt.

“For the first time, we know the geological context of the only brecciated Martian sample available on Earth, 10 years before the NASA’s Mars Sample Return mission is set to send back samples collected by the Perseverance rover currently exploring the Jezero crater,” said Lagain, a research fellow in the School of Earth and Planetary Sciences at Curtin. “This research paved the way to locate the ejection site of other Martian meteorites, in order to create the most exhaustive view of the Red Planet’s geological history.”

Payré studies the nature and formation of Mars’ crust to determine if Earth and Mars share a common past that include both a continent-like and ocean-like crust. She uses orbital observations captured in this region to investigate whether traces of volcanism similar to Iceland exist on Mars.

“As of today, Mars’ crust complexity is not understood, and knowing about the origin of these amazing ancient fragments could lead future rover and spatial missions to explore the Terra Sirenum-Cimmeria region that hides the truth of Mars’ evolution, and perhaps the Earth’s,” she said. “This work paves the road to locate the ejection site of other martian meteorites that will provide the most exhaustive view of the geological history of Mars and will answer one of the most intriguing questions: why Mars, now dry and cold, evolved so differently from Earth, a flourishing planet for life?”

The team’s algorithm is adapted to detect impact craters constellating Mercury and the Moon, the other terrestrial bodies. This can be used to help unravel their geographical history and answer foundational questions regarding their formation and evolution. This work is a starting point to guide future investigations of the Solar System.

An Ocean of Galaxies Awaits