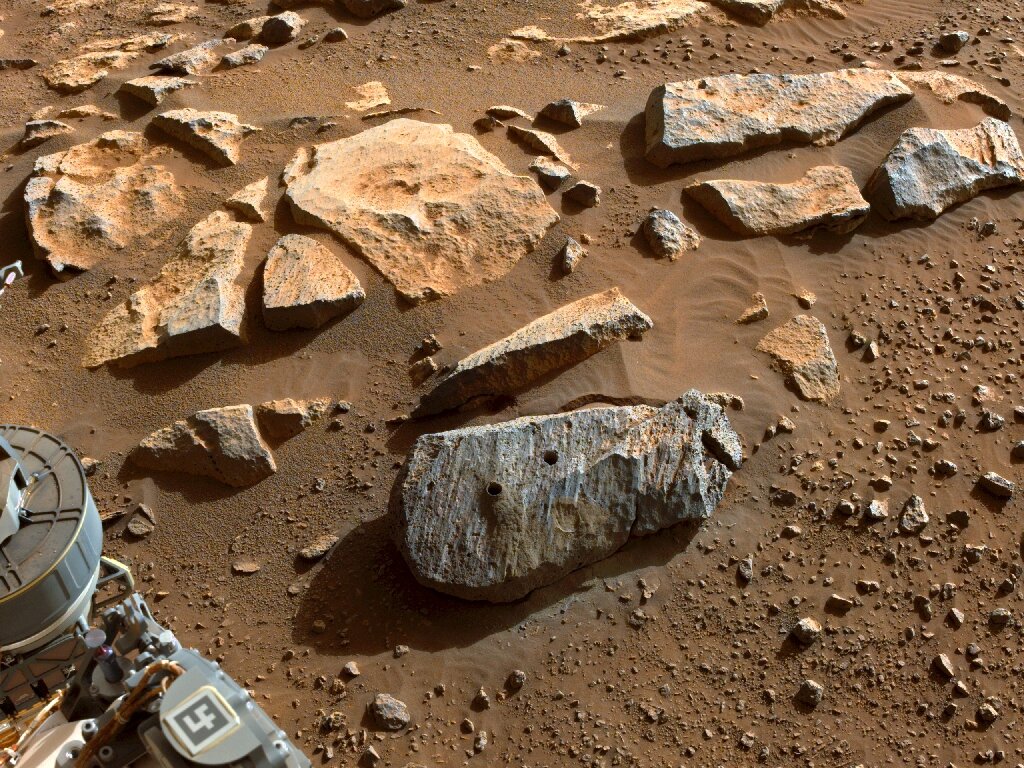 A clay mineral known as smectite could hold a substantial portion of the water missing from Mars, according to new research from Binghamton University, State University of New York.

Rivers and streams once flowed across the surface of Mars, etching channels still evident on the planet’s surface today. Water in lakes once lapped ancient shores. But today, Mars’ red sands appear bone-dry. Where did all that water go?

Some of that water is trapped in the planet’s polar ice caps, which behave like stone due to Mars’ frigid temperatures. The rest may have gone underground, locked inside clay minerals such as smectite.

New research from Binghamton University Geological Sciences and Environmental Studies Professor David Jenkins and former graduate student Brittany DePasquale provides information on how deep smectite could occur in the surface rocks of Mars. They found that iron-rich smectite, the least-stable form of smectite, can form to depths up to 30 km, much deeper than others might have predicted. In view of this rather robust stability for smectite, it appears that clay minerals are able to receive and store the missing water on Mars.

“Up until recently many people, including myself, assumed that any water formerly existing on Mars was now present as ice stored at the polar caps and as subsurface ice,” said Jenkins. “It is really just in the past several years that there has been enough data collected from satellites orbiting Mars to determine that there is not enough ice, nor enough loss of water vapor from the surface of Mars, to account for even the lower estimates of the amount of water that once existed on Mars. Once we saw that ferrous-iron-smectite, the least thermally stable form of smectite, was stable up to temperatures of about 600°C at 30 km depth, it became clear that smectite might actually be a significant reservoir for the ‘missing water’ on Mars.”

The primary contribution of this study is that it provides maximum temperatures to which ferrous-iron-rich smectite can exist with increasing depth in Mars. Up to this point, previous studies have focused on demonstrating the low-temperature formation of smectite, but have not demonstrated how stable it can be.

“This latter information is necessary if we are to try and determine to what depth the clay mineral smectite might occur on Mars,” said Jenkins.

Mars in a lab

While many geologists head to mountains, valleys and other locations to parse the secrets of the Earth, Jenkins simply pops next door to his laboratory, a marriage between a chemistry lab and a machine shop. In its confines, he and his students can reproduce conditions that mimic anything from the surface of the Earth to the intense heat and pressure of its mantle — or even more theoretical places, such as the early days of Mars.

“I cook and squeeze materials to see how they respond, whether they’re stable or not, whether they change their chemistry or their crystal structure and, if so, how do they do that?” he said.

By cooking and squeezing smectite, Jenkins and DePasquale established a temperature ceiling for its formation, which may offer clues as to how and where the mineral formed on Mars. On Earth, smectite most often results from a reaction between rock and water; however, the conditions for that reaction, such as pressure and temperature, are still highly speculative.

Unfortunately, there is currently no equipment on Mars that could drill deep enough to confirm that depth. However, the red planet has an underground shortcut of sorts: impact craters, which litter the surface of Mars, particularly in the southern hemisphere. The satellites orbiting the planet also collect remote sensing information that can relate to mineralogy, such as wavelengths of light reflected from the planet’s surface.

“Although this study helps affirm the importance of clay minerals as a potential reservoir for water on Mars, it certainly is not the final word on this subject. The more difficult question of the total amount of clay minerals in the surface or near-surface environment of Mars is yet to be determined with the precision needed to really confirm that clay minerals may be the dominant water reservoir on Mars.”