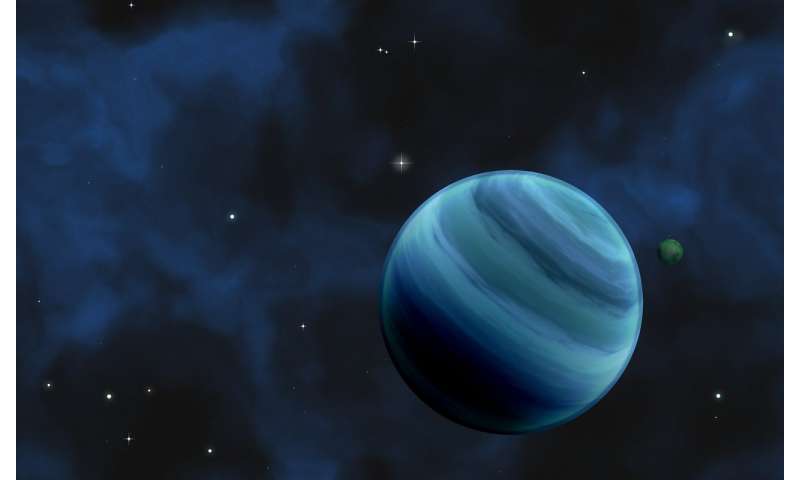 Scientists have discovered thousands of exoplanets, including dozens of terrestrial — or rocky — worlds in the habitable zones around their parent stars. A promising approach to search for signs of life on these worlds is to probe exoplanet atmospheres for “biosignatures” — quirks in chemical composition that are telltale signs of life. For example, thanks to photosynthesis, our atmosphere is nearly 21% oxygen, a much higher level than expected given Earth’s composition, orbit and parent star.

Finding biosignatures is no straightforward task. Scientists use data about how exoplanet atmospheres interact with light from their parent star to learn about their atmospheres. But the information, or spectra, that they can gather using today’s ground- and space-based telescopes is too limited to measure atmospheres directly or detect biosignatures.

Exoplanet researchers such as Victoria Meadows, a professor of astronomy at the University of Washington, are focused on what forthcoming observatories, like the James Webb Space Telescope, or JWST, could measure in exoplanet atmospheres. On February 15 at the American Association for the Advancement of Science’s annual meeting in Seattle, Meadows, a principal investigator of the UW’s Virtual Planetary Laboratory, will deliver a talk to summarize what kind of data these new observatories can collect and what they can reveal about the atmospheres of terrestrial, Earth-like exoplanets. Meadows sat down with UW News to discuss the promise of these new missions to help us view exoplanets in a new light.

Q: What changes are coming to the field of exoplanet research?

In the next five to 10 years, we’ll potentially get our first chance to observe the atmospheres of terrestrial exoplanets. This is because new observatories are set to come online, including the James Webb Space Telescope and ground-based observatories like the Extremely Large Telescope. A lot of our recent work at the Virtual Planetary Laboratory, as well as by colleagues at other institutions, has focused on simulating what Earth-like exoplanets will “look” like to the JWST and ground-based telescopes. That allows us to understand the spectra that these telescopes will pick up, and what those data will and won’t tell us about those exoplanet atmospheres.

Q: What types of exoplanet atmospheres will the JWST and other missions be able to characterize?

Our targets are actually a select group of exoplanets that are nearby — within 40 light years — and orbit very small, cool stars. For reference, the Kepler mission identified exoplanets around stars that are more than 1,000 light years away. The smaller host stars also help us get better signals on what the planetary atmospheres are made of because the thin layer of planetary atmosphere can block more of a smaller star’s light.

So there are a handful of exoplanets we’re focusing on to look for signs of habitability and life. All were identified by ground-based surveys like TRAPPIST and its successor, SPECULOOS — both run by the University of Liège — as well as the MEarth Project run by Harvard. The most well-known exoplanets in this group are probably the seven terrestrial planets orbiting TRAPPIST-1. TRAPPIST-1 is an M-dwarf star — one of the smallest you can have and still be a star — and its seven exoplanets span interior to and beyond the habitable zone, with three in the habitable zone.

We’ve identified TRAPPIST-1 as the best system to study because this star is so small that we can get fairly large and informative signals off of the atmospheres of these worlds. These are all cousins to Earth, but with a very different parent star, so it will be very interesting to see what their atmospheres are like.

Q: What have you learned so far about the atmospheres of the TRAPPIST-1 exoplanets?

The astronomy community has taken observations of the TRAPPIST-1 system, but we haven’t seen anything but “non-detections.” That can still tell us a lot. For example, observations and models suggest that these exoplanet atmospheres are less likely to be dominated by hydrogen, the lightest element. That means they either don’t have atmospheres at all, or they have relatively high-density atmospheres like Earth.

Q: No atmospheres at all? What would cause that?

M-dwarf stars have a very different history than our own sun. After their infancy, sun-like stars brighten over time as they undergo fusion.

M-dwarfs start out big and bright, as they gravitationally collapse to the size they will then have for most of their lifetimes. So, M-dwarf planets could be subjected to long periods of time — perhaps as along as a billion years — of high-intensity luminosity. That could strip a planet of its atmosphere, but volcanic activity can also replenish atmospheres. Based on their densities, we know that many of the TRAPPIST-1 worlds are likely to have reservoirs of compounds — at much higher levels than Earth, actually — that could replenish the atmosphere. The first significant JWST results for TRAPPIST-1 will be: Which worlds retained atmospheres? And what types of atmospheres are they?

I’m quietly optimistic that they do have atmospheres because of those reservoirs, which we’re still detecting. But I’m willing to be surprised by the data.

What types of signals will the JWST and other observatories look for in the atmospheres of TRAPPIST-1 exoplanets? Probably the easiest signal to look for will be the presence of carbon dioxide.

Q: Is CO2 a biosignature?

Not on its own, and not just from a single signal. I always tell my students — look right, look left. Both Venus and Mars have atmospheres with high levels of CO2, but no life. In Earth’s atmosphere, CO2 levels adjust with our seasons. In spring, levels draw down as plants grow and take CO2 out of the atmosphere. In autumn, plants break down and CO2 rises. So if you see seasonal cycling, that might be a biosignature. But seasonal observations are very unlikely with JWST.

Instead, JWST can look for another potential biosignature, methane gas in the presence of CO2. Methane should normally have a short lifetime with CO2. So if we detect both together, something is probably actively producing methane. On Earth, most of the methane in our atmosphere is produced by life.

Q: What about detecting oxygen?

Oxygen alone is not a biosignature. It depends on its levels and what else is in the atmosphere. You could have an oxygen-rich atmosphere from the loss of an ocean, for example: Light splits water molecules into hydrogen and oxygen. Hydrogen escapes into space, and oxygen builds up into the atmosphere.

The JWST likely won’t directly pick up oxygen from oxygenic photosynthesis — the biosphere we’re used to now. The Extremely Large Telescope and related observatories might be able to, because they’ll be looking at a different wavelength than the JWST, where they will have a better chance of seeing oxygen. The JWST will be better for detecting biospheres similar to what we had on Earth billions of years ago, and for differentiating between different types of atmospheres.

Q: What are some of the different types of atmospheres that TRAPPIST-1 exoplanets might possess?

The M-dwarf’s high-luminosity phase might drive a planet toward an atmosphere with a runaway greenhouse effect, like Venus. As I said earlier, you could lose an ocean and have an oxygen-rich atmosphere. A third possibility is to have something more Earth-like.

Q: Let’s talk about that second possibility. How could JWST reveal an oxygen-rich atmosphere if it can’t detect oxygen directly?

The beauty of the JWST is that it can pick up processes happening in an exoplanet’s atmosphere. It will pick up the signatures of collisions between oxygen molecules, which will happen more often in an oxygen-rich atmosphere. So we likely can’t see oxygen amounts associated with a photosynthetic biosphere. But if a much larger amount of oxygen was left behind from ocean loss, we can probably see the collisions of oxygen in the spectrum, and that’s probably a sign that the exoplanet has lost an ocean.

So, JWST is unlikely to give us conclusive proof of biosignatures but may provide some tantalizing hints, which require further follow-up and — moving forward — thinking about new missions beyond the JWST. NASA is already considering new missions. What would we like their capabilities to be?

That also brings me to a very important point: Exoplanet science is massively interdisciplinary. Understanding the environment of these worlds requires considering orbit, composition, history and host star — and requires the input of astronomers, geologists, atmospheric scientists, stellar scientists. It really takes a village to understand a planet.